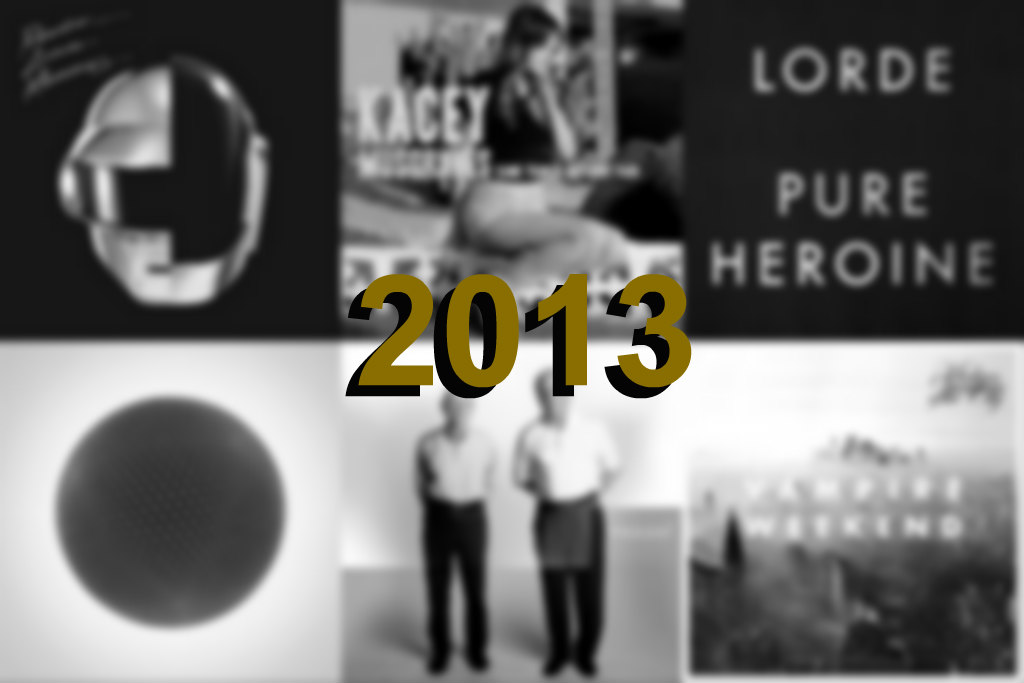 Okay, getting to this one relatively quick compared to the last few. So let’s see… In 2013 I was in my second year at my third college, still pursuing my engineering degree. As I was deep into it, keeping up with music and such understandably took a bit of a back seat. As such, this list is much shorter than the previous ones, and the next few will be as well. It’s actually a little strange. I like to highlight key historical events in these intros and it’s like the whole world took a little break in 2013. Yes, stuff still happened, but the biggest universal thing I could come up with was the resignation of Pope Benedict and subsequent election of Pope Francis. Movies were a little dry too. The biggest things there were Frozen and Man of Steel. One took pop culture by storm and the other was a feeble attempt at recreating the success of the Marvel Cinematic Universe. Anyway, below are a handful of albums from the year that have stuck with me.

DAFT PUNK – RANDOM ACCESS MEMORIES–Anyone who knows me knew that this album was going to be on this list. Everyone’s favorite French robots took their sweet time releasing their 4th studio album. 8 years, to be exact (if you don’t count their soundtrack for Tron: Legacy). And after flirting with disco back on Discovery, they delivered pretty much a straight-up disco album with Random Access Memories. Never ones to do anything halfway, they recruit disco heavyweights Giorgio Moroder and Nile Rodgers, as well as modern heavyweights like Pharrell Williams, Julian Casablancas, and Panda Bear. This album has everything from massive electro-disco bangers that are over 9 minutes long (“Giorgio by Moroder”) to perhaps one of the catchiest and best composed minimal pop songs ever (“Doin’ It Right”). I also feel like this album either predicted or kicked off the recent re-emerging of disco in pop music.

KACEY MUSGRAVES – SAME TRAILER DIFFERENT PARK–I listened to this album on the recommendation of an acquaintance who was a big fan of country music. I had expressed my dissatisfaction with a lot of modern country and he pushed this one on me, assuring me that I would like it. And dammit, he was right. Musgraves’ more folk-leaning brand of country pop and her honest lyrics immediately endeared themselves to me. One could even argue that this album qualifies as outlaw country with it’s musical portraits of middle America. I often credit this album as the one that got me into modern country music and assured me that good stuff can be found in the genre. And Kacey Musgraves has continued to make great music and prove herself to be a formidable force in the world of modern country.

LORDE – PURE HEROINE–Yeah, it’s another one that had a single that blew up and maybe got a little overplayed. But it’s also another one where that overplayed single kind of deserved all the attention and the album is full of other songs that are just as good or better. Lorde released this album when she was only 17 years old, which makes the quality of it all the more impressive. The world of pop music needed something to shake it up, and Pure Heroine‘s dreamy and minimal synthpop with lyrics that critique celebrity culture was exactly the thing. This was further emphasized by the way Lorde delivered here lyrics in a dreary and apathetic way, paving the way for future stars like Billie Eilish. This was an album that I listened to repeatedly, to the point of making myself sick of it.

TESSERACT – ALTERED STATE–This album was part of my introduction to the djent side of progressive metal. A roommate let me borrow it when I expressed some interest (a year or two after it came out) and I was impressed. This was the English band’s second album and the only one with vocalist Ashe O’Hara. The album’s 10 tracks are packaged in 4 suites, each named in a way that completes a phrase started by the albums title (Altered State… Of Matter, Of Mind, etc.). What really left an impression from this album was the band’s use of odd time signatures, but still maintaining a groove. There are passages where you want to move your head with the chugging guitars, but you find yourself missing the beat as they take an unexpected turn. I believe this still stands as one of the better albums that came out of the djent boom.

TWENTY ONE PILOTS – VESSEL–I’d like to say that I knew about Twenty One Pilots before they were cool, but that wouldn’t be entirely accurate. A more appropriate statement is that I knew about them before they were on a major label but they already had a massive hometown following. I loved their blending of indie pop with hip-hop and dark lyrics with upbeat music. I was thrilled when I heard that they were signed to Fueled By Ramen and given a larger platform. The re-done tracks from their indie release were only made better and the new tracks fit with them well. And they took the world by storm like everyone knew they would. Admittedly, this album in particular has not aged all that well, but it’s still listenable. And the band only went up from here.

VAMPIRE WEEKEND – MODERN VAMPIRES OF THE CITY–I feel like I’ve been talking about this album a lot recently, but I don’t really mind because it’s a fantastic album and one of my top favorites from the past decade. Vampire Weekend impressed me with Contra and then blew me away with Modern Vampires. I like to describe this album as taking the band’s sound to its logical, and sometimes absurd conclusion, bringing the trilogy of albums to a nice close. Songs on this album like “Diane Young” and “Everlasting Arms” inspire repeat listens even today, 7 years later. This would be the last album with Rostam Batmanglij as a member of the band, and the band would go on a bit of a hiatus, waiting 6 years before delivering the follow-up. Needless to say, they ended this period of their career on a high note.